Desalination is one of many technologies for water supply. In 2018 desalination accounted for 13.9% of the capex for municipal and industrial water supply and the cumulative desalination plants delivered less than 1% of the supply of water. It is the most expensive form of delivering fresh water and it can cause serious environmental damage with discharges of brine into inland seas. So, when is it viable?

Desalination is sometimes the only solution for water supply in very demanding circumstances, either of water shortage or when ultra pure water is required for industrial process.

This Desalination Report positions desalination in the maze of water flows and treatment technologies for water and waste, and examines competitive technologies.

The water and waste sector is quantified in $ capex at all stages of the water value chain, including desalination as a segment within the total infrastructure.

Currency Converter
VAT
All UK based orders subject to 20% VAT. This will be added once you have entered your UK address.
Testimonials

A very remarkable piece of work

I finally found time to take a deeper look into your report and the data. I must say it is a very remarkable piece of work and collection of data and would like to congratulate you for this.

A real benefit for us

Defining a global market cockpit with a regional breakdown and future perspective seemed like an everlasting task due to the lack of comprehensive data. StatPlan made it possible to create the necessary derivations and provided us additional analyses as well as direct support for the interpretation. By talking the ‘same language’, the StatPlan energy market knowledge and their experienced view is a real benefit for us. 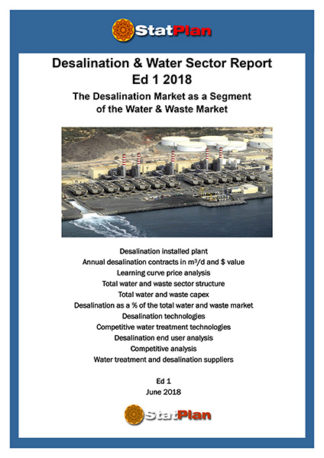