Steam turbines and gas turbines occupy parallel but different market segments. The turbine market will grow at a cagr of 4.4%, due to the continued increase in coal-fired and gas-fired power capacity, industrial expansion in the developing world and tightening AQ controls. China and India are pruning back on new coal-fired plants, but they are not stopping. Turkey, Indonesia and Bangladesh are going large on coal, and the United States is up-grading large chunks of its big coal-fired fleet to supercritical technology. This activity means more, advanced class steam turbines. Developments of gas turbines are expected in China.

The research for this report was carried out with extensive desk research and reference to StatPlan’s own databases, together with interviews conducted with industry executives in the United States, Europe and China.
56 pages.

Click here to read an outline and table of contents

Currency Converter
VAT
All UK based orders subject to 20% VAT. This will be added once you have entered your UK address. 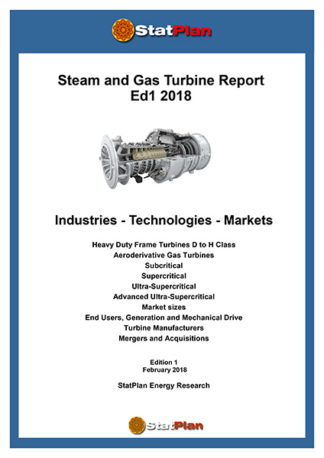