The future is already with us

We are in the midst of a telecoms revolution. The technology has moved so fast that it is always approaching obsolescence, and never more so than now as the innovation cycles accelerate. 3G increased the demands on the systems and 4G escalated the volume of data traffic beyond anyone’s expectations, changing usage patterns. 5G will drive demand even further, and will require new expanded capabilities. At the same time, earnings are under pressure as ARPU declines. The operators have to grow capabilities and do it more cheaply. The first solution is the HetNet, densifying the networks and providing greater capacity for data traffic, with better Quality of Service for users inside buildings. To deliver this from the core to the Modern telecoms networks contain an ever-increasing variety of proprietary hardware. The second solution is the key enabling technology of Network Virtualisation (NV). NV can deliver network functionality via software running on industry-standard commercial off-the-shelf (COTS) hardware. Virtual networks are decoupled from the underlying network hardware. This is already happening in production networks across the world. It is enabling 4G and making the 5G revolution possible.

Network technology is evolving rapidly to meet exponential new demands. The focus is shifting from coverage to capacity, driven by the rise in data traffic. The answer is the HetNet/Heterogeneous network. Past networks were based almost entirely on macro cellular base stations mounted on towers, rooftops and poles. They were designed for volumes of voice mail which were small by today’s standards. Data traffic has grown exponentially and is set to escalate by leaps and bounds, driven by the Internet, videos, and a plethora of 3G and 4G mobile devices. The HetNet is providing the solution; a network which combines all types of base station, each designed for a different purpose; macros on towers and rooftops, micro, metro, pico, DAS and Wi-Fi both inside buildings and outside. These issues are discussed and analysed in this report.

Crucial to the technology revolution is the increased sophistication of 4G and LTE mobile devices and the explosion of data traffic. Network architecture is being examined and redeveloped to meet this pressing need. Data traffic is charted, analysed by device and projected to 2020. This is straining not only network capacity but the smart phone devices as well. This has been dramatically underlined in September 2016 with the crisis which quickly brought about the demise of Samsung’s flagship high-end smartphone, the Galaxy Note 7 when it repeatedly caught fire. The electronics industry faces an increasing amount of power being shrunk into vanishingly small circuits. These circuits get hot and, sometimes, catch fire.

3. TECHNOLOGY PENETRATION – FROM 1G to 5G

A new mobile generation has appeared approximately every 10 years since the first 1G system, Nordic Mobile Telephone, was introduced in 1982. The first 2G system was commercially deployed in 1992, and the 3G system appeared in 2001. 4G systems fully compliant were first standardised in 2012. 5G is slowly making the transition from concept to network implementation. Network operators are already scheduling 5G trials and test beds.

Modern telecoms networks contain an ever-increasing variety of proprietary hardware. The launch of new services often demands network reconfiguration and on-site installation of new equipment which in turn requires additional floor space, power, and trained maintenance staff. The innovation cycles accelerate and require greater flexibility and dynamism than hardware-based appliances allow. Hard-wired networks with single functions boxes are tedious to maintain, slow to evolve, and prevent service providers from offering dynamic services. Key enabling technologies for this vision include SDN (Software Defined Networking) and NFV (Network Functions Virtualisation). Virtual networks are decoupled from the underlying network hardware. NFV can deliver network functionality via software running on industry-standard commercial off-the-shelf (COTS) hardware. This is already happening in production networks across the world and is rapidly gaining ground in the telecom networks. Virtualistion can be applied at many layers using the OSI model. The technology of NV is outlined, together with its benefits. The current status of NV and a brief market survey is included.

Macro base stations are the backbone of the networks providing the large area coverage to create national networks. But the networks must develop more granular delivery, both in coverage and capacity. We have constructed a database of macro base stations for every country, starting from the launch of mobile services in the 1980s. In an electricity network replacement happens when equipment is past its design life and risks failure, and the replacement may also be an up-grade. From 1G to 2G, 3G and 4G and LTE the technology of the networks must be up-dated to new generations of technology at more frequent intervals, both is hardware and software. A regional analysis of GBTs (ground based towers) and RTTs (rooftop towers) is provided.

Back haul is the interface between the network core and the base station antennas and is a critical component for both macro BTS and small cell BTS. The introduction of small cells in the radio access network as a complement to the macro cell layer will introduce many new sites and backhaul challenges. Sites are expensive, installation is costly and has delayed the introduction of small cell BTS, but it is not insurmountable. The role and basics of backhaul are outlined. Backhaul typically makes up 25%-30% of the total capex cost of a macro cell RAN (radio access network) and
a similar proportion of total cost for a small cell BTS.

7. BASE TRANSCEIVER STATIONS (BTS) FOR MACRO CELLS AND SMALL CELLS

The structure, current status and technology development of the major countries are reviewed, together with commentary on the leading players in each country. The development of telecoms communications and its technology is reviewed in the countries where it was developed.

9. INSTALLED BASE OF MACRO CELL SITES

This chapter is concerned with macro cell GBTs, RTTs and street pole base stations, and does not include small cell base stations. The installed base of macro towers and poles is forecast annually from 2015 to 2020 for the world, for regions and is analysed by 213 countries.

The market for construction of new macro base stations (BTS), ground-based, rooftop and street poles, upgrades and replacement of aged assets is estimated and forecast in nominal $ from 2015 to 2020, for the world, for regions and is analysed by 213 countries. Market commentary is provide by regions and major countries.

11. SMALL CELLS – COMPACT BASE STATIONS (C-BTS) – DEVELOPMENTS AND INSTALLED BASE

The steady growth of the macro cellular infrastructure does not fully reflect the real rate of expansion of the networks. With mobile data traffic expected to double annually, small cell base stations are set to play an important role in expanding the capacity of wireless networks. Small cells provide flexibility and increased QoS capabilities. Past development of small cells is analysed to help predict the future path. Shipments are analysed in units by cell type. The cost components of a small cell installation are analysed.

Global expenditure on installing small cells with related costs and backhaul is estimated for 2015 and projected annually to 2020 for regions and 33 countries. Capex is analysed by residential/non-residential and by cell type.

Backhaul vendors can be divided into two distinct groups. The macro backhaul vendors are now in a mature industrial ecosystem, but typically for a new technology the small cell vendors are in the earliest stage of development, consisting of a large number of small companies and start-ups, many of which will fail or will be acquired by larger rivals, before coalescing into a mature ecosystem. The top 48 companies are listed by macro/ small cell backhaul market participation.

Tower sharing allows operators to cut down on capital expenditure. Infrastructure cost for operators is estimated to decline by 16% to 20%. Running and maintenance of tower infrastructure, form a significant portion of operator Opex. Divesting responsibility for infrastructure unlocks value. Site and/or tower sharing is the most common form of network sharing, but full network sharing is gaining traction. The various forms of infrastructure sharing are outlined and the towerco market is analysed by country. A breakdown of tower construction cost by component is given.

Infrastructure and network sharing, either between operators or via independent tower owners, is growing rapidly but has a distinct regional pattern. MNOs share assets with jointly-owned infracos in Europe, Japan and many other regions. Independent towercos started in the United States and are also prevalent in India, in China since 2015, in Southeast Asia and are making headway rapidly in Sub-Saharan Africa. The incidence of sharing is given by regions and major countries with total numbers of macro towers and the numbers owned by towercos. Detailed market profiles are given for regions and leading countries.

Energy accounts for 30% of the network operating costs of an MNO. 90% of sites have diesel base generators where towers are off-grid or as standby to grid supply when grid-connected. For cost and environmental reasons there is a growing trend towards renewables systems, mainly solar PV or hybrid systems of solar PV and wind power.

A 37 page glossary is provided, which includes explanations and diagrams of terms and concepts commonly used in the telecoms sector. Acronyms are the bane of the IT and CT sectors and they are proliferating all the time. This glossary is comprehensive but by no means complete.

Currency Converter
VAT
All UK based orders subject to 20% VAT. This will be added once you have entered your UK address.
Testimonials

A very remarkable piece of work

I finally found time to take a deeper look into your report and the data. I must say it is a very remarkable piece of work and collection of data and would like to congratulate you for this.

A real benefit for us

Defining a global market cockpit with a regional breakdown and future perspective seemed like an everlasting task due to the lack of comprehensive data. StatPlan made it possible to create the necessary derivations and provided us additional analyses as well as direct support for the interpretation. By talking the ‘same language’, the StatPlan energy market knowledge and their experienced view is a real benefit for us. 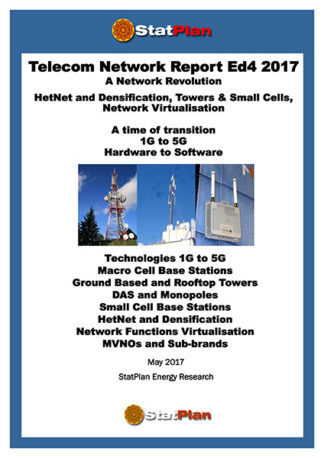